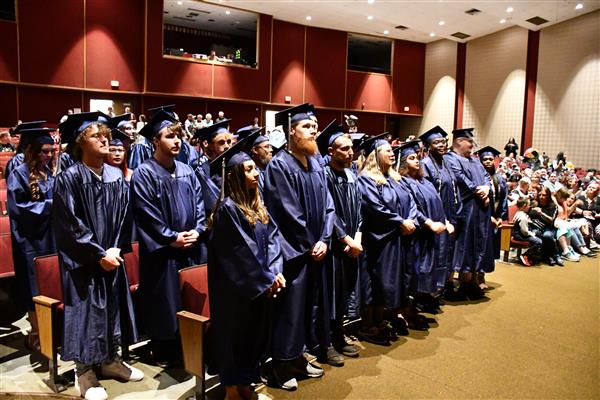 June 3, 2022, Michigan City, IN – Administrators, staff, school board members, families, and friends cheered on adult graduates from across LaPorte County as they gathered at the Holdcraft Performing Arts Center in Michigan City on Wednesday, June 1 to celebrate the achievement of an important milestone: a high school diploma.

Forty of the 214 adults who had earned High School Equivalency diplomas during the 2020, 2021 and 2022 school years opted to participate in the ceremony. Due to the pandemic, the in-person commencement ceremony had not been held since 2019.

Keynote speaker Caroline Hammonds, who teaches English-language learners for the Adult Education program, shared with graduates the story of Henry Dempsey, an Eastern Airlines pilot who hung upside down thousands of feet above the ground from an aircraft door that had opened in mid-flight. He had hung on so tight as the plane traveled at 190mph at 4,000 feet above the ground that his clenched hands had to be pried off the door railings.

Student speakers at the ceremony included graduates William James, Chyjanea Crawford, and Gabriel Penate, who all shared testimonials and words of encouragement.

“I’m 60 years old!” said James, who thanked God, his family, friends, and teachers for their unwavering support. “I’m proof that it is never too late.”

Crawford gave special thanks to one of her Adult Education teachers, Trish Tompkins. “I came here with nothing, and I’m leaving here with everything,” she said. “Getting a GED doesn’t mean you didn’t make it. It means you went the extra mile to get where you’re headed.”

Penate praised the A. K. Smith and WorkOne staff for helping him reach his goal. A native of Columbia, he said he spoke no English when arriving in the U.S. as a child. “A lot of people in my life told me I wasn’t going to make it,” he said. “But I told them no, I’m going to follow my dreams. This is America and you can do anything here as long as you go for it and do it the right way.”

Michigan City Area Schools Board President Marty Corley also spoke during the ceremony, telling graduates he is inspired by their dedication and hard work. Sharing several lines from the Prayer of St. Francis, he encouraged them to continue to keep a positive attitude. “Attitude is more important than the past, than money, than success, than skill, than giftedness,” he said.

Dr. Barbara Eason-Watkins, Superintendent of Michigan City Area Schools, told graduates she had heard heartwarming stories regarding their perseverance, hope, and accomplishments, especially during the pandemic. “We are very proud of you and the courageous manner in which you continued your pursuit of your education during a most challenging school year,” she said. “Whatever path you take now, your efforts will open the door to higher education or career success.”