Michigan City Area Schools honored 19 employees who are retiring this year - many of whom have 25, 30, 35 or more years of service! A special dinner in their honor, sponsored by MCAS and the Michigan City Education Association, was held on June 3 at Blue Chip Casino.

In addition, four former MCAS employees were inducted into the 2018 MCAS "And then Some" Wall of Fame, which is permanently housed in Heritage Hall at Michigan City High School. 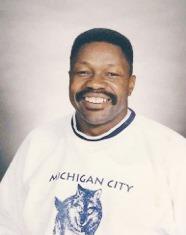 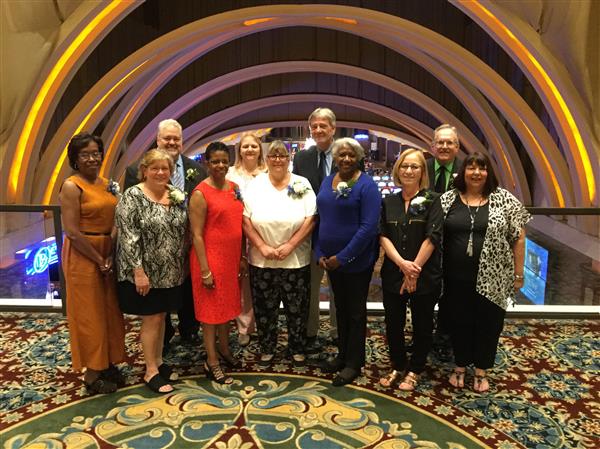 Congratulations to the 2019 MCAS Retirees (11 are pictured above, in a photo taken following the retirement dinner honoring them) and THANK YOU for your many years of service to our students!

Kathleen Burroughs (26 years) retired as the Payroll Director at the Administration Building, where she began as the Assistant Payroll Director in 1992. She is retiring from MCAS, but will continue her career elsewhere.

Laura Calusa (46 years) attended Coolspring Elementary as a student – then returned there to teach for 46 years! During that time, she taught third, fourth, and fifth grades. She retired from MCAS last summer.

Debi Downs (24 years) looks forward to spending more time with her mother, who now lives with her after having spent 24 years in Florida. Since joining MCAS in 1994, Debi has worked as a secretary at the Administration Building and was the Principal’s Secretary at Pine Elementary School.

Clausell Harding  (8 years) served as the Adult Education Coordinator at A.K. Smith. He wants to thank everyone for making his experience at MCAS such a rewarding one.

Dorothy Harris (8 years) worked at the Administration Building as the Special Projects Assistant for the Superintendent from July 2010 to August 2018. She is now enjoying retired life, especially the time she spends fishing and traveling.

Cindy Hastings (35 years) plans on “seeing what each day brings and enjoying the many new experiences that I will have” in retirement. She has been a Special Education teacher with MCAS since 1984, having worked at both Rogers and Michigan City High Schools.

Victoria Hill (24 years) began as a student teacher at Mullen Elementary School, then went on to teach full time – mostly kindergarten – at Central, Park, Niemann, Knapp, and Coolspring Elementary Schools from 1974-76, and again from 1996-2019. Her retirement plans include traveling to see family, lunches out with girlfriends, reading for pleasure, staying up late, and sleeping in.

Connie Hudock (26 years) has kept track of our high school students since 1993! She began her MCAS career at Elston High School and is now retiring as the Attendance Secretary and Receptionist at Michigan City High School.

Melvin Kovenz (26 years) has plenty of interesting plans for retirement... one of which is opening his own goat yoga ranch! Landscaping his pond and property, visiting relatives, camping, developing regular sleep patterns, and stand-up paddle boarding are some of his other plans. Mel is retiring as the Swimming coach; he also coached Diving and taught Health and Physical Education at the elementary, middle, and high school levels. He served as a member of the MCHS Safety Committee and Building Leadership Team, and he was chairman of the Attendance Committee.

Brian Meyers (6 years) has taught Spanish at MCHS since 2013. He also served as the Boys’ Soccer coach. As he heads into retirement, Brian looks forward to spending time with his 5-year-old grandson, teaching adult and college classes, subbing at his former school in Chicago, writing, blogging, podcasting, and engaging in politics in Northern Illinois.

Gwen Miller (12 years) taught English Language Arts at Elston, Krueger, and Barker Middle Schools beginning in 2007. She also coached the Barker Academic Team and coordinated the Scripps Spelling Bee and National Geographic Geography Bee. She served as Barker’s union rep and was a member of the Building Leadership Team, Instructional Leadership Team, and RTI Team. She will miss her Barker family and awesome teammates in retirement, but looks forward to spending more time with her family, gardening, and volunteering with the Special Olympics.

Theresa Moore (19 years) came to MCAS in 2000, and has worked as a lunchroom aide and instructional assistant at Springfield, Niemann, and Marsh Elementary schools. She sees lots of rest and relaxation in her near future!

Pamela Penn (21½  years), a paraprofessional at Springfield and Niemann Elementary Schools since 1997, has big plans for retirement. She’ll be taking a train trip with her granddaughter, fixing up her home’s interior, crafting, volunteering at church, and vacationing in the winter.

Daniel Ruth (45 years) leaves a lasting legacy at Michigan City High School. He has taught high-school German since 1974, served as the Foreign Language Department Chair, coached the German Club, worked concessions for the Junior class, and established the German-American Partnership Program. He has traveled to Europe with generations of MCHS students. Herr Ruth looks forward to spending more time with his wife, children, and grandchildren. He also plans to camp and travel throughout the U.S. and Germany.

Megan Schroeder (36 years) began her diverse career with MCAS in 1983 as a Horticulture teacher at Rogers High School. Since then, she’s taught Medical Terminology, Landscaping, Cooperative Education, and Animal Science at the high-school level. Megan fondly remembers being the Assistant Softball coach the year the girls went to State. She is looking forward to spending as much time as possible with her parents, who are in their 90s.

Joan Seitz-Kelsey (35 years) began her MCAS career at Rogers High School, then taught at Michigan City Jr. High before returning to Michigan City High School. She has taught just about every Math class offered, including General Math, Pre-Algebra, Algebra I and II, Geometry, and Pre-Calculus. She served as the Math Department Chair at both the Jr. High and High School, and coached Mathletes for 17 years. She enjoys crafting and was the sponsor of the “Crafty Wolves” club. She has been a Girl Scout Leader for 20 years, and she plans to stay involved in Scouting in her retirement. She also plans to spend time caring for her mother and mother-in-law.

Tracey L. Sneed (14 years) has been an instructional assistant at Knapp Elementary School her entire MCAS career, and coached the pom-pom squad during basketball season one year. As she moves on, she plans to obtain her LLC and Real Estate license.

Peggy Thomas (39 years) is retiring as the Principal of Edgewood Elementary School, but she’s also served in many other capacities since joining the MCAS family in 1979. She has been a teacher of students with mild mental handicaps (MIMH) and learning disabilities (LD), a general education teacher, a literacy coach, a multi-age classroom teacher, and an assistant principal. She also coached Girls’ Basketball at Niemann, Joy, Pine, Lake Hills, and Edgewood. Peggy plans to travel and enjoy the next chapter of her life.

Cynthia Weiss (25 years), began her career as a kitchen aide in 1993 and then became Cafeteria Manager at Barker Middle School. She once taught a jewelry-making class at Barker, as well. Her hope for retirement is to move to Fort Myers, Florida, and volunteer for the Adventures in Paradise Dolphin Excursion Company.