Michigan City Area Schools honored 24 employees who are retiring this year - many of whom have 25, 30, 35 or more years of service! A special dinner in their honor, sponsored by MCAS and the Michigan City Education Association, was held on May 31 at Blue Chip.

In addition, five former MCAS employees were inducted into the 2017 MCAS "And then Some" Wall of Fame, which is permanently housed in Heritage Hall at Michigan City High School. 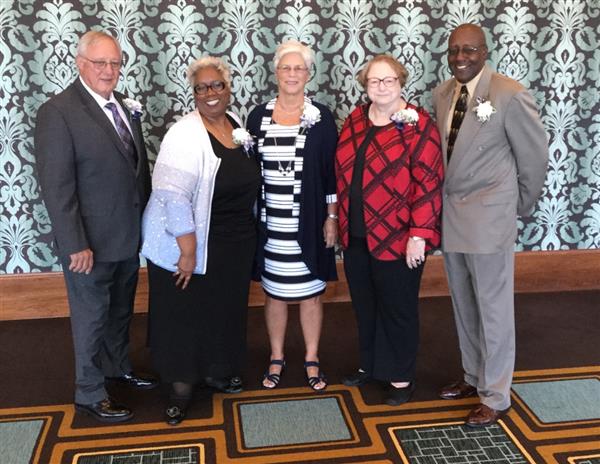 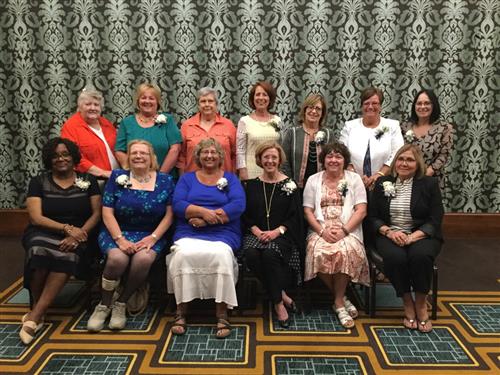 Congratulations to the 2017 MCAS Retirees (13 are pictured above, in a photo taken following the retirement dinner honoring them) and THANK YOU for your many years of service to our students!

DonnaJean Ada (32 years) drove a school bus for the Transportation Department from 1985-2017. In retirement, she looks forward to going to Disney World!

Kathy Angelo (25 years) became a professional school counselor for MCAS in 1992 and has worked at Springfield and Pine elementary schools, Krueger and Elston middle schools, and the A.K. Smith Career Center. She also worked with the Peer Mediators program, Cultural Diversity CADETS, the A.K. Smith student mentor program, and the Voyagers and NexGen after-school programs. Kathy will spend her retirement focusing on family, relaxing, and enjoying whatever the future holds.

Paulette Barkow (34 years) spent most of her career with MCAS as the Deputy Treasurer and a financial assistant at the Administration building. She also assisted Stan Holdcraft and Pacy Stype at Elston. Paulette plans to travel, ride various Indiana bicycle trails, and visit her grandchildren to watch them play in their college soccer games.

Sarah Blank (22 years) became the Barker Middle School librarian in 1995 and has spent the past three school years as the district librarian, serving all schools. She looks forward to traveling, golfing, and playing with her grandchildren during her retirement.

Patricia “Pat” Brennan (27 years) joined MCAS in 1990. She started as the attendance secretary at Rogers High School, then became the Business Manager’s secretary and payroll assistant at the Administration building. She hasn’t set plans for her retirement, but is simply looking forward to the future.

LaCinda Browning (29 years) was a counselor for 8 years before coming to MCAS in 1987. She served students at Rogers High School, the A.K. Smith Career Center, and Michigan City High School. She has nothing planned for her retirement. . . yet!

Carla Cooper (22 years) was an instructional assistant at Pine Elementary School from 1994-2017.

George Demchak (20 years) is a veteran of the Transportation Department who has driven special needs and general education students to Michigan City High School, Krueger Middle School, and Coolspring Elementary School. He’s enjoyed driving on field trips, interacting with the students daily, and playing the guitar at Transportation Department get-togethers. In retirement, George looks forward to relaxing, listening to music, and keeping up with other retirees.

Elizabeth Edmond (18 years) was hired as an instructional assistant for MCAS in 1999. She worked most of her career (16 years) at Coolspring, and two years at Joy. She is moving to Florida after retiring.

Bobette Larson (17 years) wore very different hats during her career with MCAS. For several years (1986-90) she was an English Department instructional assistant at Krueger Middle School, and served as the Chapter 1 parental involvement director at Central Elementary. She returned to our school district in 2004. . . this time as the lifeguard for the Michigan City High School physical education department. She is now moving to Florida!

Carol Loveless (25 years) became a school nurse for MCAS in 1992, and worked at Eastport, Edgewood, Springfield, Long Beach, Coolspring, Park, Mullen and Joy elementary schools. She looks forward to becoming more involved in her church, and says she plans to go “where God leads.” Carol also plans to spend time with her family and friends, travel with her husband, enjoy her hobbies, and learn something new.

Lynn Mitchels (25 years) has been an art teacher since 1992, having taught students at Michigan City High School, Elston Middle School, and Pine, Springfield, Marsh, and Niemann elementary schools. She also worked with the Academic Super Bowl team. Lynn plans to travel with her husband, Allen, after retiring.

Nancy Moldenhauer (16 years) has been a guest teacher, library media specialist, first grade teacher, and English Language Learning instructor for MCAS. She worked at Coolspring, Edgewood, Joy, Knapp, Marsh, Mullen, Niemann, Park, Pine, and Springfield elementary schools; Barker, Elston, and Krueger Middle Schools; and Michigan City High School. She also was a site coordinator and tutor for the Boys & Girls Club at Niemann. In her retirement, Nancy plans to spend quality time with family, friends, and herself; travel the world extensively (by this summer, she will have visited all 50 states!); and advocate for health, safety, and the preservation of our planet. Currently, she serves as a Michigan City Human Rights Commissioner and is vice president of Save the Dunes. Since people keep asking her, she may run for office again.

Beverly Mooneyhan (23 years) is retiring as the secretary at Joy Elementary, where she brings a smile to everyone who calls or enters the school. She also has worked at Springfield Elementary School and Eastport Early Learning Center. Bev’s plan for retirement is simply to enjoy life!

Sheryl Odle (24 years) will retire at the end of this summer, after working for MCAS in various capacities and at all school buildings. She has been a library secretary and computer technician, and also led staff development. Sheryl looks forward to spending time with her grandsons, spending more time in Florida, quilting, reading, and working on other projects.

Patricia Risner (38 years) started her cafeteria career when Michigan City High School was Rogers High School. She has been a kitchen helper, second cook, third cook, and Tech III. Pat will spend her retirement focused on her top priority – caring for her special-needs son, who is 51.

Jeanne St. Peter (23 years) spent all but one year of her tenure with MCAS as a library secretary (for one year, she was an eighth-grade science teacher). She served students and staff at Rogers, Elston, and Michigan City high schools. Jeanne says she’ll spend retirement doing “whatever floats my boat.”

Lorraine Shroyer (17 years) is retiring as a Tech I for the Food Service Department. She has worked at Elston and Krueger middle schools, Niemann and Springfield elementary schools, and Michigan City High School. She plans to spend time with her husband, travel, and relax during her retirement. Lorraine looks forward to “being a snowbird” and not having to get up early!

Judy Troske (16 years) came to MCAS after working for 10 years as a registered nurse in the Pediatrics and Obstetrics departments at the former Memorial Hospital in Michigan City. She was the school nurse at Springfield and Coolspring elementary schools and Barker Middle School. Judy fondly remembers giving a weekly “nurse talk” on Barker News Network, during which the students would sing a special song about their school nurse to the tune of “Good Lovin’” by The Rascals. She plans to spend her retirement reading, de-cluttering her house, sleeping in, and traveling.

Kathleen Walker (39 years) is the first Rogers High School graduate to return as a teacher, which she did in 1977. During her tenure, she has been a high school business teacher, an MCEA Scholarship Committee member, Indiana University Groups recommender, and cultural diversity facilitator. She also established the first elementary school keyboarding program in Indiana, served as an assistant volleyball coach, and worked with the Diversity Club, Stepping Out, Summer Enrichment, and Debutante-Master Ball programs. Kathleen has worked at Rogers, Elston, and Michigan City high schools; Barker Junior High; Elston Middle School; and Park, Knapp, Joy, Niemann, Marsh, and Coolspring elementary schools. She looks forward to spending her retirement sleeping in, watching TV, reading for pleasure, traveling, and enjoying her family and friends.

John Zdravich (4 years) taught Read 180 and summer school, and assisted students with credit recovery. He was a long-term substitute for a year prior to joining MCAS full-time, and has a background in both business and education. John hopes to move to Italy permanently.