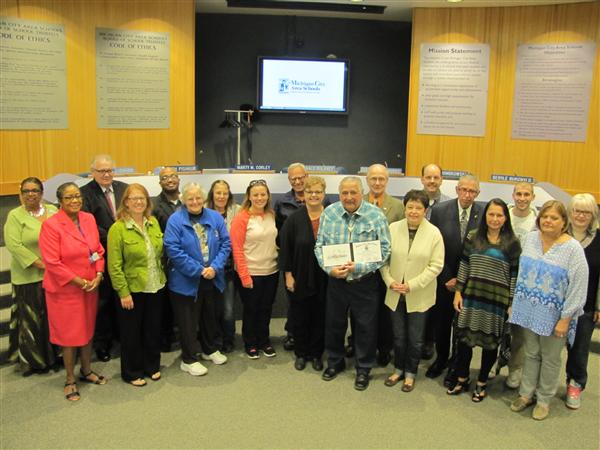 Volksdorf initially received the diploma on the occasion of his 85th birthday, and was then honored by the Michigan City Area Schools Board of Trustees during its September 27th meeting. He was also honored by A. K. Smith with an honorary induction into the Technical Honor Society.

“This may be the first time in our school district’s history that we have granted an honorary diploma,” said MCAS Superintendent Dr. Barbara Eason-Watkins. “We can't find any record of a similar situation. In fact, we obtained special permission from the Indiana Department of Education to move forward with this.”

Although Volksdorf never received a high school diploma, he has had a successful professional career in the machining and manufacturing industries. He has volunteered at the A. K. Smith Career Center in the Manufacturing lab for the past 30 years, sharing his expertise with countless students.

Congratulations, Mr. Volksdorf - and thank you for your contributions!

Click here to read coverage of this special honor that appeared in the News Dispatch.
Copyright © 2002-2022 Blackboard, Inc. All rights reserved.