Students in the Construction Technology class at the A. K. Smith Career Center presented a donation of $4,411 on Friday, September 23, to Claudette Harrison, founder of “A Hand Up.” (They expect to collect another $600 for the cause next week based on pledges they have gathered, bringing the total to just over $5,000!)

Dick Bucher, Construction Technology teacher, said his students had planned on participating in the Homeward Bound Epic Shopping Cart Walk held in Michigan City on September 17th to support A Hand Up, but due to last-minute conflicts were unable to take part. “We knew the most important aspect of the shopping cart event was fundraising, and the students didn’t want to let that go.”

Students received a large donation for their cause from the Road Sprinklerfitters, the pipefitters union, but the majority of the funds were raised through donations from individual donors. The 29 students in the class attend high schools from across LaPorte County, including Michigan City High School.

Harrison said the donation would be earmarked for the building fund. It will be used to purchase windows and other supplies needed for renovation projects this fall that the students are assisting with, including completion of a closet and work on the basement ceiling.

For more information about A Hand Up or to make a donation, visit www.ahandup.us. 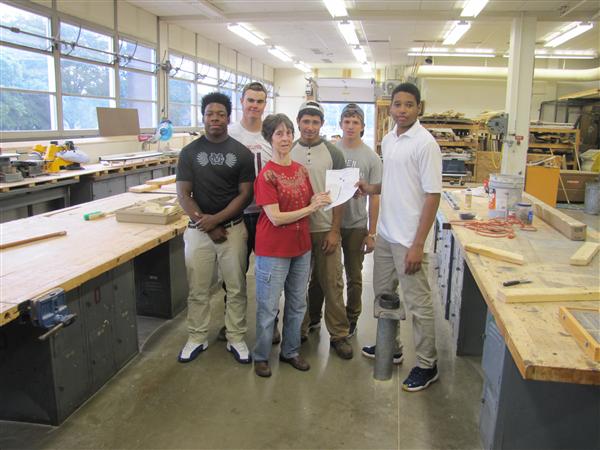