Three student artists from Michigan City High School received awards at the 2017 Scholastic Art Awards competition in South Bend. Their work will be on exhibit through March 11 at the South Bend Museum of Art.

The Scholastic Art Awards is a juried contest that features the best work from more than 2,500 students across Northwest Indiana and Southwest Michigan, from schools in 18 counties. Jurors select artwork that excels in originality, technical skill, and the emergence of a personal vision or voice to receive awards.

Work that receives the highest rating, a Gold Key, is sent to New York City to compete at the national level.

Myra Davis, who earned a Gold Key for her mixed media artwork, Media Kills. Her work will now compete at the national level.

Molly Heath, who earned a Gold Key for her photograph, Ballin'. Her work will also compete at the national level.

Katelyn Hansen, who received an Honorable Mention for her mixed media work, Enigmatic. She also received a special award from the judges, the Hoosier Art Patron Award, and a $100 prize. 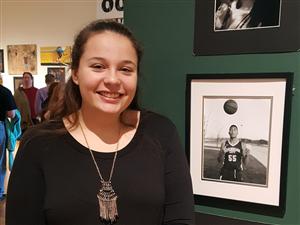 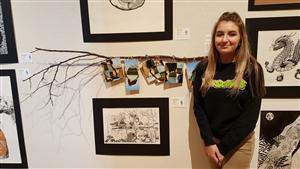 Only 5-7% of the entries at the regional level receive a gold key, and only 10-15% are honorable mention.

The Scholastic Art Awards are the most heavily attended exhibition in the South Bend Museum of Art’s annual schedule, attracting about 5,000 visitors each year. More information is available at http://www.southbendart.org/education/scholastics
Copyright © 2002-2021 Blackboard, Inc. All rights reserved.