Barker Middle School STEM Teacher Amy Hamann has been selected as an Indiana finalist for the Presidential Awards for Excellence in Math and Science Teaching. This is the nation's highest honor for teachers of science, technology, engineering, and mathematics. She is one of only three Indiana Educators chosen for this prestigious award and she will now be considered at the national level. This is the second time she has been honored as a state-level PAEMST winner! (She was a PAEMST Indiana State Finalist in 2013 also!)

State finalists PAEMST applications have been sent on to the National Committee who will select one math and one science teacher for this prestigious award from each state. The White House will release the announcement of the 2021 PAEMST Awardees. 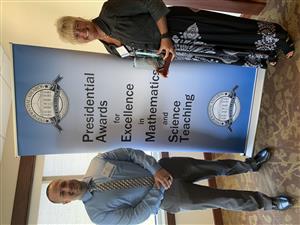