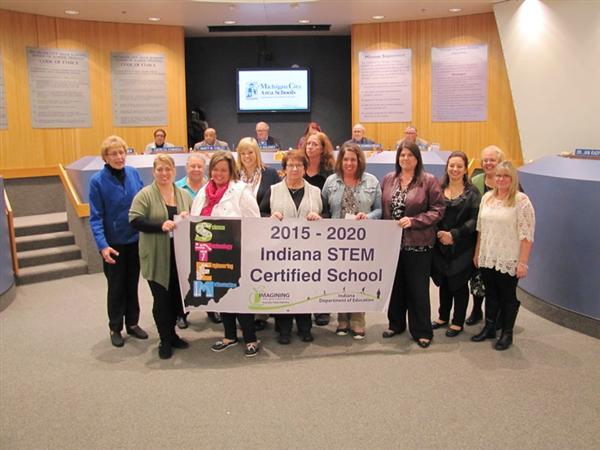 Michigan City, IN – November 19, 2015 –Lake Hills Elementary School in Michigan City was honored in Indianapolis on Tuesday, November 17, for obtaining certification as a STEM (Science/Technology/ Engineering/Math) school. Lake Hills is one of only nine schools in Indiana to receive the designation.

Indiana Superintendent of Public Instruction Glenda Ritz presented Lake Hills Principal Connie Bachmann and STEM Coordinator Shelley Deutscher with a large banner recognizing the certification during the 2015 Indiana STEM Symposium. Special guests on hand for the presentation included Melissa Moritz, Deputy Director of STEM for the United States Department of Education, as well as leaders from the Department of Workforce Development, Project Lead the Way, and experts in higher education and STEM industries.

During the MCAS School Board meeting Tuesday evening, Lake Hills teachers and staff were recognized for their efforts. “We already knew Lake Hills was a leader in Indiana and even nationally,” said MCAS Superintendent Dr. Barbara Eason-Watkins. “Five years ago they were the first public magnet school doing STEM in our state, and many schools and educators have visited Lake Hills as a model of innovation. We are thrilled that Lake Hills has received this well-deserved honor.”

“We could not have accomplished this without the support of our staff, parents, and community partners,” said Lake Hills Principal Connie Bachmann, who noted that the school has over 75 community partners involved in its work. “The future of Michigan City, the future of America, is in STEM. Students need to know how to get along with one another and how to be creative problem solvers. It’s about connecting the dots for our kids, to provide them with the skills they need to succeed.”

Indiana’s first nine STEM Certified Schools were named following a rigorous application and review process. In announcing the designation, the Indiana Department of Education stated that the schools selected exemplify “a highly non-traditional approach to education by employing a great deal of inquiry, project based learning, community engagement, entrepreneurship, student centered classrooms, and out-of-school STEM activities. STEM Certified Schools have been able to accomplish this feat while following educational policies set by the state and excelling under the system of accountability.”

Lake Hills opened as a STEM magnet school in 2011. It serves students in kindergarten through sixth grades, maintaining a primary focus on core academic subjects while engaging students through a STEM-themed approach. Lake Hills has received several awards for its work, and in 2013 was selected as one of only 41 schools nationwide to pilot the Project Lead the Way engineering curriculum at the elementary level. It received an “A” letter grade from the State of Indiana in 2013 and 2014.